Chemicals are essential components of our daily lives. However, some chemicals, known as endocrine disruptors, can have harmful effects on the animal endocrine (hormone) system.
Hormones act at very low amounts and at precise moments in time to regulate development, growth, reproduction, metabolism, immunity and behavior. Endocrine disruptors interfere with natural hormone systems, and the consequences on health can manifest long after the exposure period.
Our lab is interested in the impact of endocrine disruptors on energy balance (including adipogenesis), reproduction and development.

A wide range of environmental substances, both natural and man-made, are now recognized to cause endocrine disruption, including pharmaceuticals, dioxin-like compounds, polychlorinated biphenyls, pesticides, and plasticizers such as bisphenol A and phthalates.

We are especially interested in plasticizers, often employed in food-contact materials (food containers, kitchenware) and in other household plastic items.

They are poorly bound or not bound to the polymers, a feature that facilitates their migration, thus coming in contact with humans through food consumption, skin absorption and inhalation.

Some chemical toxicants have been named “obesogens” or “metabolic disruptors”, because of their ability to promote adiposity by altering fat cell development and increasing energy storage of fat tissue.
We currently employ in v 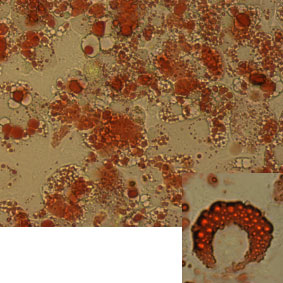 itro cellular models of adipogenesis to test the metabolism disrupting potential of several classes of compounds (including plasticizers phthalates, bisphenols and organophosphates).
We test potentially obesogenic chemicals by quantifying the rate of differentiation into mature adipocytes, their capability to increase lipid accumulation, and the potential mechanisms involved. 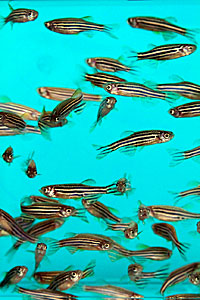 We also test the impact of endocrine disruptors on the neurons involved in the central control of reproduction.
For this, we employ cell lines of GnRH neurons in order to characterize potential effects of these chemicals on cell proliferation, migration, survival, differentiation, intracellular signaling and gene expression.
We can also test the effects of potential endocrine/metabolic disruptors on developmental processes in vivo by employing a widely utilized model in toxicology and developmental biology, the zebrafish embryo, in collaboration with the Molecular Biothecnology Centre (Dr. Giorgio Merlo).